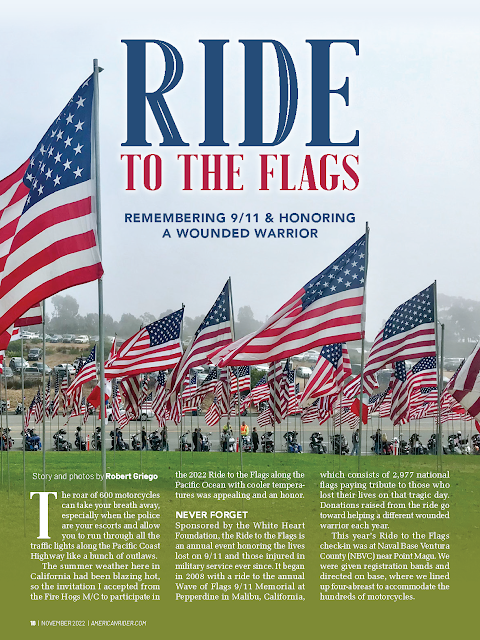 I'm proud of this article and the bikers, especially my Fire Hogs M/C friends, who rode that day in tribute to those lives lost on 9/11 and to honor and support a wounded warrior — Jordan Stevenson.
The entire article, to be released November '22, can be found in American Rider Magazine.

HOPE IS A POWERFUL TOOL

"The recipient of donations for the 2022 ride was Explosive Ordnance Disposal Technician, 2nd Class, Jordan Stevenson, who had spent seven years on active duty in the Navy and spoke at the ceremony. Stevenson was grievously injured during a deployment in Afghanistan with the 3rd/75th Rangers. While atop a wall getting eyes on the enemy, he was struck by a bullet that went through his helmet, through his head, and out the back of his helmet, causing him to fall 30 feet. Surviving such a wound is a miracle, and he ended up with paralysis of his right leg and arm. Stevenson captured my heart for his determination to return from hell. His military training had prepared him for death in battle, but he said he was “pissed-off” when doctors told him he would never walk or talk again. “Hope is a powerful tool,” he said passionately, adding that it would’ve been better if the doctors had instead..."

RIDE TO THE FLAGS

"The roar was deafening as we fired up our motorcycles at NBVC. We would ride the 30-mile route south in pairs, accompanied by a full police escort. On both sides of the on-ramp to Highway 1, about 50 Boy Scouts in full uniform with American flags stood tall at full salute to send us on our way as if we were heroes. They honored us and those who lost their lives during 9/11. Bystanders all along PCH watched hundreds of motorcycles moving as one. Children jumped up and down, surfers waved flags, and some stood at salute...

After the ride ended, bikers remained to walk among the 2,977 flags paying tribute to those who lost their lives that tragic day 21 years ago. Never forget..."

Posted by Robert Griego at 4:17 PM