The article "In Pursuit of Wildness:  Zion National Park" by Robert Griego was originally published on the "RoadRUNNER Touring & Travel" magazine website on 9/17/2018.

In Butch Cassidy and the Sundance Kid, the two bank- and train-robbing bandits sought these red canyons as their hideout from the law. I was mesmerized by Paul Newman and Robert Redford in this modern-day Western, but honestly, the scenery captivated me more. I knew that one day I would have to visit the wild canyons of Zion National Park.
I’m relieved to see only 11 vehicles ahead of me when I arrive at the South Campground at 5 a.m., after riding 535 miles from Three Rivers, CA. It’s first come, first served here, and so I patiently wait until the campground opens at 7. In just 10 minutes, 30 more vehicles are lined up behind me. In past years when the campground was full, I have camped near Virgin on Bureau of Land Management land. There is a perfect spot there, just off Mesa Road, high on a mesa where free public land camping is available with incredible views. That’s my back-up plan.
The campground Ranger approaches, smiling. “You’ll get a site today,” she says. “After a camper leaves, you’ll be assigned your campsite.” I like this system. “Ok”, she says a short while later, “go to campsite #68.” My assigned spot is next to the Virgin River and I can’t wipe the grin off my face. There’s another campground called Watchman which is on a reservation system, and that one fills up months early. I’m tired. The desert sun near Needles, CA, drained me. I set up my hammock between two cottonwood trees and the cool breeze sways me to sleep. I think about the three things I’m going to experience: Walter’s Wiggles, the Narrows, and that mile-long tunnel.
In the morning, I’ll be hiking the Angels Landing Trail to see Walter’s Wiggles for the first time. The immense landscape slows me down considerably. The higher elevations, with each step, create panoramic views of the Zion Canyon below. It’s not easy walking, but the views are incredible. Finally, I stop at Walter’s Wiggles, the 21 short switchbacks leading from Refrigerator Canyon to Scout Lookout.
This portion of the Angels Landing Trail was designed and built by Walter Ruesch, the first Superintendent of Zion National Park and the grandfather to another one, Scott Ruesch. Scott and I worked together at Sequoia and Kings Canyon National Park, and while I knew that his mom and dad were National Park Service professionals, I had never heard about his grandfather. Walter was my inspiration to travel some 600 miles from Three Rivers to see this landmark for myself. I had never met the man, but I was determined to see the marvel he created. Pictures don’t do it justice. You must walk this trail, breathing the thin air, and see the heavenly views to appreciate the rock work along this iconic walkway, named Walter’s Wiggles, an amazing feat by today’s engineering standards and incredible for 1926!
The Narrows is best described as an adventure. In waist-deep water, I’m soaking wet as I move up the Virgin River like an explorer. The red canyon walls are high and I imagine I’m a scout for the Lewis and Clark Expedition. It’s wild and I feel alive within the grandeur of this canyon.
The mile-long tunnel heading toward Fredonia is a must on a motorcycle. There are “windows” along the tunnel, displaying fantastic views of a wonderland where very little has changed since outlaws roamed the trails. 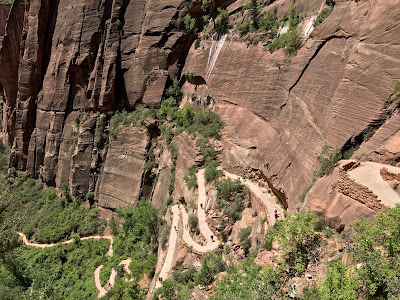 Planning a Visit
Zion National Park offers a variety of activities across several geographic regions. In 1909, it began as Mukuntuweap National Monument but was granted national park status in 1919. Billions of years ago, the Virgin River carved valleys on the sandstone in southwest Utah. Now, we can walk through the canyon of Zion National Park.

Zion means “the heavenly city” and the park’s Kolob Canyons are named for a heavenly body described as being nearest God’s throne in Mormon scripture. You won’t find any churches in the park, but there are certainly plenty of sights that inspire reverence.
TO DO
Backpacking, bicycling, birding, camping, canyoneering, climbing, hiking, horseback riding, Ranger-led activities, visitor centers, picnicking, and stargazing.

Visit nearby Pipe Springs National Monument, Cedar Breaks National Monument, Bryce Canyon National Park, Capitol Reef National Park, and Canyonlands National Park.
PLANNING A VISIT
Park your motorcycle and take the stress-free park shuttle, which is efficient and an excellent way to see the park. It can be boarded at visitor centers, campgrounds, and most lodges.
HOURS
Zion National Park is open 24 hours a day, every day of the year. Some services and facilities may close or reduce hours during parts of the year. Always carry water!
COST
Costs are $25 per motorcycle; $15 individual; and $30 a vehicle. Zion Annual passes are $50. Keep in mind that parks keep 80 percent of all fees collected; the remaining 20 percent is deposited in a special account to be used for parks where fees are not collected. These proceeds fund projects not funded by Congress. Parks are a great deal. Take advantage.

For more information or to purchase a pass, visit: www.nps.gov/zion