The article "In Pursuit of Wildness: Manzanar National Historic Site" by Robert Griego was originally published on the "RoadRUNNER Touring & Travel" magazine website on 8/26/20.

“Our differences in beliefs do not truly separate us or elevate us over others. Rather, they highlight the rich tapestry that is humanity.”— George Takei 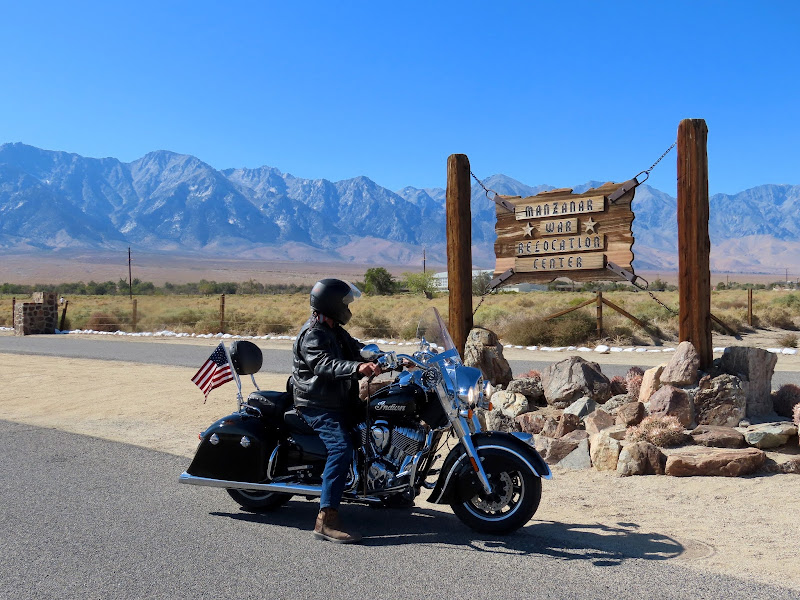 Once upon a time, Manzanar National Historic Site was called Manzanar War Relocation Center. It was one of 10 camps where Japanese American citizens were incarcerated during World War II. I had never been there, and I knew little about this site, though I knew that it is managed by the National Park Service, for which I once worked at Sequoia and Kings Canyon National Parks, just west from there over the Sierra.

Manzanar National Historic Site, established on March 3, 1992, can be found along a section of US 395 known as the Sierra Vista Scenic Byway, about 10 miles from Lone Pine, CA. Lone Pine is a springboard to some amazing motorcycle routes: the towns of Bishop and Mammoth Lakes, Death Valley National Park, Yosemite National Park, Devils Postpile National Monument, and Lake Tahoe. This story begins at the Lone Pine Campground, one of my favorites. The campground sits at an elevation of around 6,000 feet and has a birds-eye view of 14,494-foot, snow-laced Mount Whitney on the eastern Sierra mountain range. There are over 40 campsites located next to a babbling creek.

The campground is virtually empty as I circle the loop looking for just the right site. Every campsite has a yellow “reserved” sign that expired last night. Then a pattern begins to emerge. All the names were reserved with Japanese surnames. Why so many? Surely, the campground host approaching in his golf cart would know. “Why are there so many Japanese names?” I ask as he removes the signs.

“They were here for a pilgrimage of sorts. They went to Manzanar for a special celebration. They reserved all of the campsites yesterday, and left early this morning,” he explains. “You’ve picked the best site,” he adds.

The campground is quiet and the night sky is bright as my campfire crackles. A shooting star crosses the entire sky. I wait for another one; perhaps the Japanese campers did too. Sleep comes easily as I look for the next shooting star. I think the coyote in the distance waits too, or maybe the sliver of the moonlight caught his attention. I think more about the Japanese campers and what they must have been looking for in these night skies. Perhaps it was only a glimpse into the past. I can only imagine the talk around the campfire, full of respect and honor, paying homage to family and friends who endured hardships beneath the ever-watching eye of Mount Whitney. Sleep finally comes, but my mind is lingering on the Japanese campers. Tomorrow, I will go to Manzanar National Historic Site.

There is a light rain as I head north on US 395; I exit onto the frontage road, Blue Star Memorial Highway. The guard tower points me toward the former Manzanar War Relocation Center. But first, I must pass by the original Military Police Sentry Post before heading to the visitor center.

The camp opened on June 1, 1942, and closed on Nov. 21, 1945. More than 11,000 Japanese Americans were processed through the facility, which at its peak had a population of 10,046. Overall, the U.S. government detained more than 110,000 men, women, and children—Japanese American citizens and resident Japanese aliens—at this and other military-style camps. It is painful to read the statistics.

Manzanar National Historic Site will force you to think about this time in our history. It’s hard to understand, yet war does that to even civilized nations. We may not be proud of what we did, but the National Park Service has done an outstanding job to help define this moment in time. How do we right a wrong? The question is hard. The National Park Service has started by telling the story, written by survivors of that era, and that’s a step forward.

Manzanar National Historic Site tells the story of the thousands of Japanese Americans who spent all or part of World War II at the war relocation camp at Manzanar. Start your visit by watching the award-winning 22-minute film Remembering Manzanar, which is shown every half hour at the visitor center’s theater. The film includes rare historic footage and photographs as well as personal recollections of several people who were incarcerated at the remote desert facility. As the park literature states, the film “gives viewers a sense of the place and its past, and a glimpse into a time when American citizens were exiles because of their ancestry.” When planning your trip, keep in mind that this can be a windy area, and temperatures vary from 100 degrees in the summer to 40 degrees in the winter. These are the same conditions encountered by those incarcerated here during World War II.

In addition to the visitor center, which has the film and exhibits, there are ranger-led activities, a 3.2-mile self-guided driving tour, “Block 14” exhibits depicting life at Manzanar, and opportunities for biking, birding, and wildlife viewing. The Annual Manzanar Pilgrimage event traditionally is held in April.

Posted by Robert Griego at 3:47 PM No comments:

"All good things are wild and free".  -  Henry David Thoreau

A few days ago, Christa Neuhauser Publisher & Editor-in-Chief of RoadRUNNER Motorcycle Touring & Travel asked me to write an article for their upcoming Special Collector's Edition.  She asked if I could select a small, lesser-known National Park Service area on the West Coast.  I was honored and came up with some possibilities. She quickly let me know that she wanted other options.

She agreed with the area that I selected and asked if I could meet a short deadline.  While I can't yet reveal the area, it is a small NPS area located on the West Coast. The Special Collector's Edition will be published soon and should be loaded with awesome pictures and stories.  Keep an eye out for it at newsstands.

It was a fun assignment allowing me to turn wheels and feel the wind in my face along with some quality camping at Basalt Campground at San Luis Reservoir.

It has been a while since I've ridden my Indian Springfield for a story and this is just what the doctor ordered.  I camped once going to this park and once coming home.  A quick, yet rewarding trip.

Going home, I rode Highway 1 past Half Moon Bay, Santa Cruz, and Moss Landing.  The fog was thick and wet.  The views were limited, though I could hear the crashing waves.  The sun did peek out for a bit as I stopped to stretch my legs.

Here are some pictures of that quick trip.  Enjoy.

Posted by Robert Griego at 9:23 PM No comments: 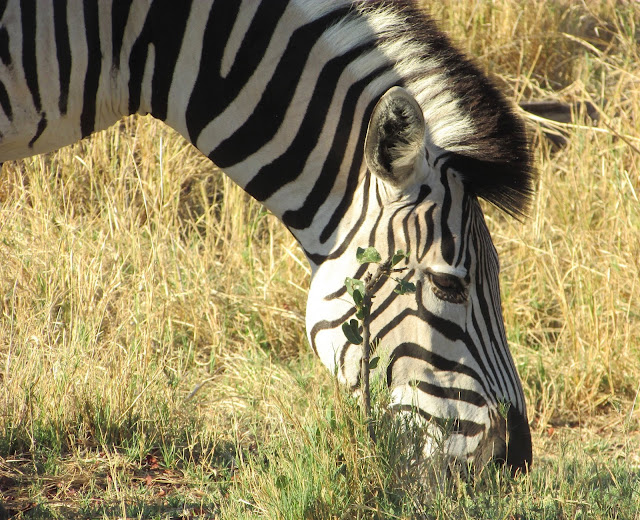 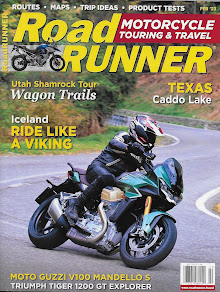