~ Courageously They Died - By Inspiration They Lived ~ 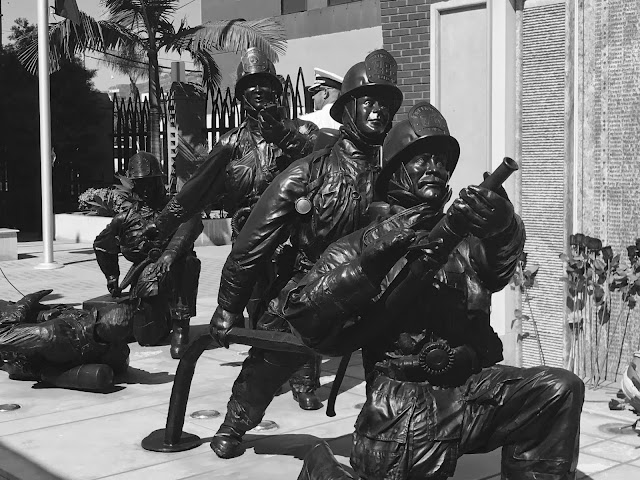 Riding a motorcycle on the LA freeways can be a challenge, but for me, it was terrifying.  I am on the Hollywood freeway desperately trying to find the Los Angeles Fire Department Museum & Memorial at 1355 North Cahuenga Boulevard in Hollywood, California.  I need divine help as cars are flying by me like Indy Car racers at 80 miles an hour.

The invitation in my pocket read: “The men and women of the Los Angeles Fire Department cordially invite you to join civic and community leaders, as well as friends and family of the LAFD, as our community gathers to honor the 268 members of our Department who have made the ultimate sacrifice in their service to the City.”  I had never received such a format invitation before and to think it was all because of a story a had written called “Mile Marker 88.” 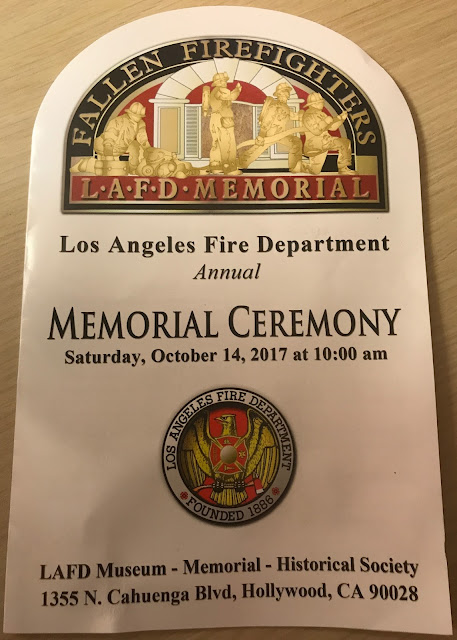 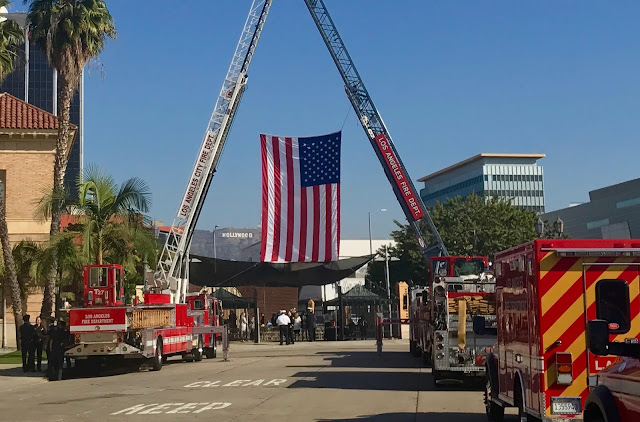 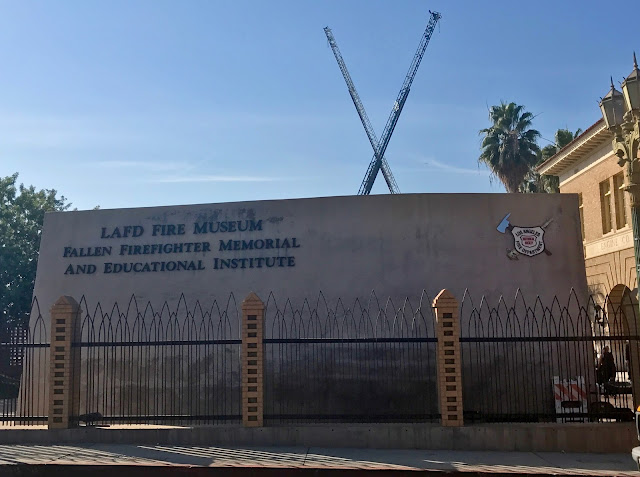 Three weeks earlier I was riding my motorcycle near Kingman, Arizona on a very peaceful road called Route 66.  The contrast between the Hollywood freeway and Route 66 is too difficult for me to put down in a few words.  Worlds apart.  I was at Mile Marker 88 to honor a LA Firefighter who died in a motorcycle accident.

The Los Angeles Fire Department has an annual Memorial Ceremony to honor the memory of all Los Angeles firefighters who have made the ultimate sacrifice in the line of their duty.  It is held at Old Fire Station 27 which, when built in 1930, was the largest station west of the Mississippi River. Today, it is a museum. 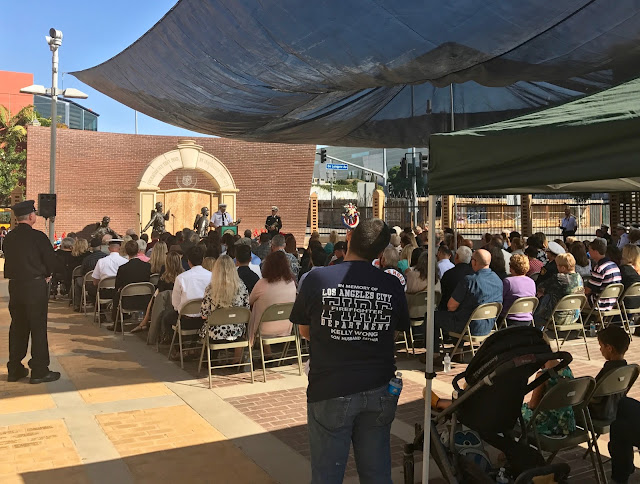 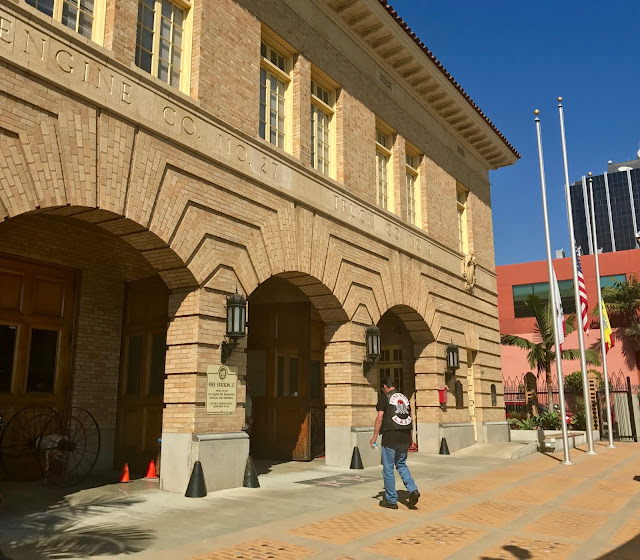 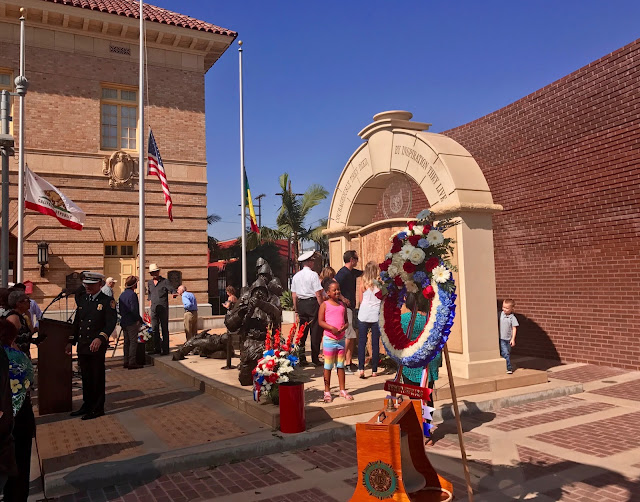 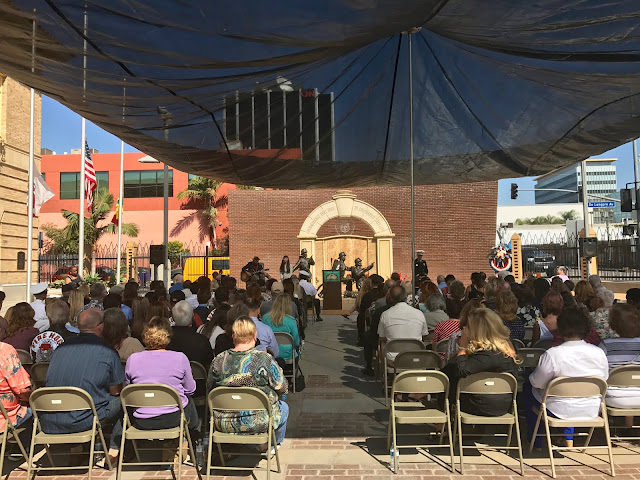 The Memorial Wall consists of five bronze statues, each one carefully representing an LA firefighter during a fire incident in the city.  The wall, directly behind the bronze statues, lists the names of every known active duty department member who died while responding to or at an incident.  I am impressed with the LA Fire Department leadership who annually remember those fallen firefighters.  In fact, while the sounds of a bagpipe play in the distance, the names of every fallen firefighter is read – one by one. Some names of firefighters go back over 100 years.  Impressive.  Honorable.  Never Forgetting.  The keynote speaker, pauses in his talk, he turns around to read the words inscribed on the memorial directly behind him:

COURAGEOUSLY THEY DIED ~ BY INSPIRATION THEY LIVE

Those seven words are really what this story is about. I shared in their celebration, had lunch with them, and thanked them for their service.  I did not take many pictures but the ones I did take, speaks volumes about this Ceremony to remember and honor fallen firefighters within their family.  I could not be more proud. I’m so glad that I came here despite the nerve-racking freeway traffic. Oh, I must say a few words about the man and lady who sang songs during the ceremony.  They sang from their hearts and the songs perfectly matched the words spoken.  Music lifts spirits even during our most somber times. Thanks.

Family and friends are allowed to come forward and place a rose at the base of the Memorial as the name of a loved one whose name inscribed on the wall is read.

Leaving, I ask a firefighter “What is the best way to get out and hit Highway 101 going north, I’m not from around here.”  I follow his instructions precisely.  The traffic is wild.  I can only hope that I make it out of Hollywood alive.  Seriously, those are my thoughts.

Soon, the traffic begins to slow, I’m approaching Santa Barbara.  My plan is to continue my ride north along Highway 1 towards Lompoc, Vandenberg Air Force Base, and Guadalupe.  These places are important to regain my balance.  Balance in life is important, and on a motorcycle is critical.

Near Guadalupe, I see migrant farm workers in the fields.  It is Sunday, yet they work.  I once as a young kid worked in the fields near Bakersfield picking peaches.  It was hard work and the peach fuss was a pain for a ten-year-old boy. I remember towards the end of the day, we jumped into the canal and swam.  It was not your YMCA pool but it cooled us off and the peach fuss went downstream.  I loved it.  Our dad, however, was trying to make a few extra dollars for our family.  I must admit, being color blind, did not help selecting the right peaches.  I think that working in the fields might have been the jumping point for me into the wild.  As a kid, the wild was there, if only jumping into a canal to cool off.

I’m distracted by the past as I pass the endless rows of crops as I leave Guadalupe towards Pismo Beach.  Such beauty, split by perfect rows full of green crops.

Riding a motorcycle along Highway 1 is a dream come true.  The wind is in your face and the warm sun encourages me to continue.  Pulling off my helmet, the sound of the waves crashing on the beach replaces the ‘hum of my motorcycle.’  The sound of nature is good.  It puts me in my place with each crashing wave.  Time slows down.  I’m so thankful that I am here.  And to think, the insane Hollywood freeway brought me here. 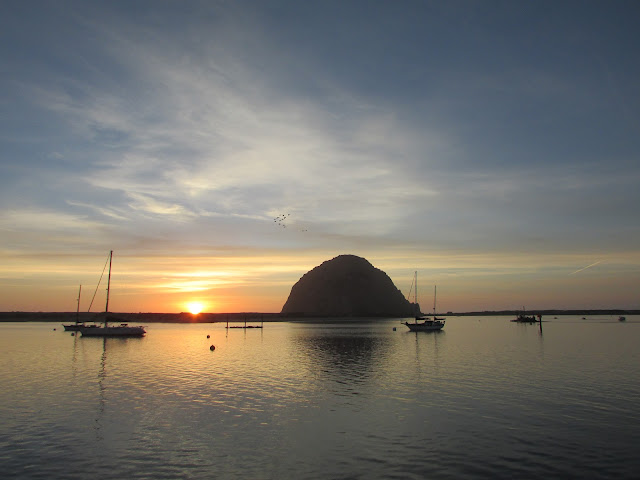 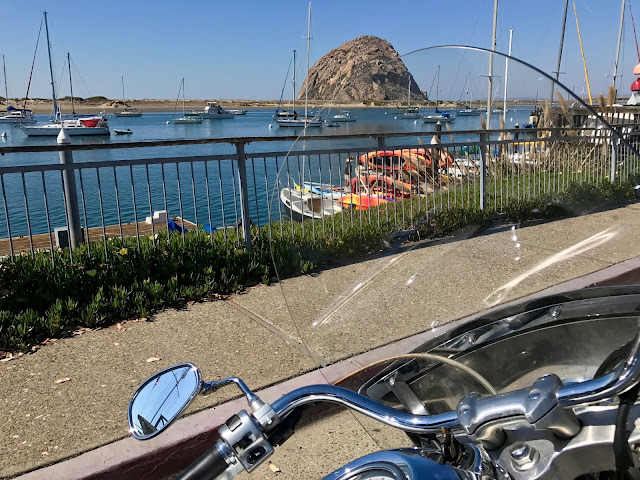 After a short walk to stretch my legs at Pismo Beach, I continue my ride to Morro Bay. The weather is warm and it is hard not to get a good picture.  I continue up Highway 1 towards Cambria and San Simeon.  I’ll camp at the San Simeon Campground – Washburn, site #224.  There is plenty of firewood around and my campfire is relaxing.  As I turn on my transistor radio, I pick up an LA station that is broadcasting the baseball game – Dodgers versus the Cubs.  I listen to the entire game on my transistor radio, something I have not done for many years.  I remember listening to Vince Scully with my good friend Warnell when we were 12 years old in Barstow pretending that we were Duke Snider, Sandy Koufax, and Maury Wills.  I’ve camped on this very site before; I like it. 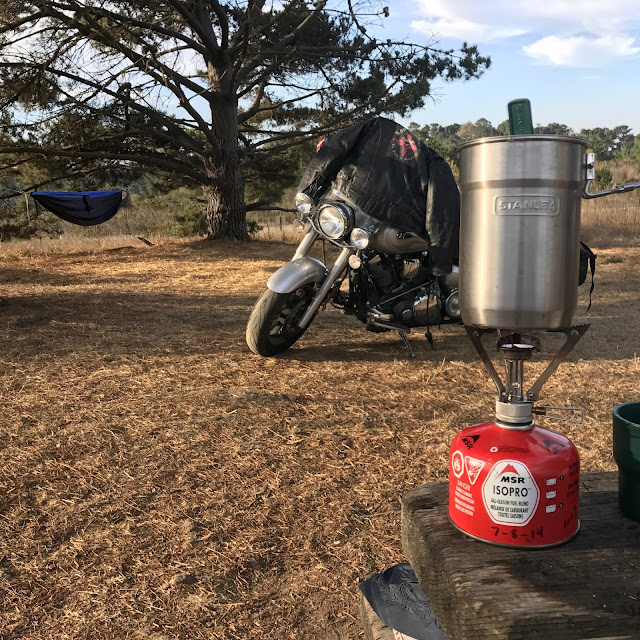 I have time on my hands so I make a big change.  On a moment’s impulse, I decided to look up an old friend.  His name is Jim Langford and we worked together at Pinnacles National Monument.  He was the Chief Park Ranger and my mentor on the Search and Mountain Rescue Team.  I had never climbed before and Jim taught me everything I know today about climbing rock faces.  He, in my opinion, is one of the premier rock climbers in the world.  I call his son, Jody, who tells me where his dad lives and arranges our meeting after some forty-four years.  Jim is eighty-five years young.  A bit nervous, non the less, I'm looking forward to this connection to the past.

As we reminisce about our days at Pinnacles, talk flows easily about our rock climbing days.  As he describes a particular rock climb that we made, I listen.  I listen intently.  His words sound identical to the ones he spoke just before a serious climb above the reservoir.   “Do you remember the Hatchet?” he asks.  I nod.  “Once you got into the notch, your next move took you into thin air, and you had to make your move upwards at that precise moment.”  Honestly, those were the same words he spoke fourty-six years ago as I got ready to lead the hairy pitch before me known as the Hatchet.  When I reached the summit, I could not believe that I climbed this route.  Jim knew I would and he followed me to the top as easily as a walk in the park.

It was so good to see him again and to get acquainted with his son, Jody who was 7 or 8 during our Pinnacles days.  We frequently used Jody in our rock climbing training, strapping him into a rescue litter and taking turns lowering him off a sheer rock face.  He never complained.  Today, Jody spends his time taking pictures as a professional photographer; visit him at his Sierra Mountain Photography.  His love for nature is evident in his amazing pictures, especially in the Sierra Nevada.  I’ll be doing a story soon for RoadRUNNER Magazine called “The Carrizo Plain National Monument.”   The flowers this year were brilliant and I felt that I got a few good pictures.  That was until I saw the absolutely magnificent flower pictures that Jody took in the Carrizo Plain.  Look over his shots and you’ll agree.  I never did any serious rock climbing with Jody, but his photography would take me to the top of any mountain.

This trip taught me that life is full of moments, even if they span forty-six years.  They were there in Hollywood to remember fallen firefighters and with my good friend Jim Langford, one of the premier rock climbers in the world.