This Memorial Day was spent attending the annual Bishop Mule Days; something I've done for years supporting the packers from Sequoia and Kings Canyon National Parks.

But before I get to all the cowboys, cowgirls, horses, and mules, I wanted to remember and honor my uncle Valentin Moya on this Memorial Day. 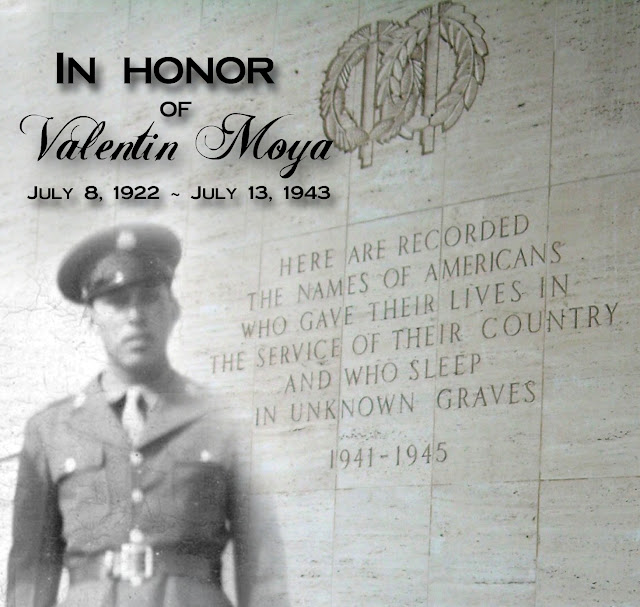 Our mother’s youngest brother, Valentin Moya was born on July 8, 1922 in La Joya, New Mexico and died on July 18, 1943.  He joined the Army as a young man, and likely lied about his age in order to be accepted.  He was part of the 43rd Infantry Division which, in June and July 1943, was in the South Pacific area where they had just landed on Rendova and New Georgia Islands.  The objective here was to take the Munda Airfield occupied by the Japanese.  It was captured by the US Army forces after 12 continuous days of fierce fighting and fell on August 5, 1943.

The official Army records factually tell us that  “…at about 0125, 18 July 1943, the US Navy LST-342 (Tank Landing Ship) was en-route from Guadalcanal for Rendova Island (to capture Munda Airbase) and was torpedoed without warning by the Japanese submarine RO-106.  The stern portion of the LST-342 was blown off by the torpedo explosion and sank almost immediately.  The actual location was south-east of New Georgia, Solomon Islands in position 09º03'S, 158º11'E (about 50 miles southeastwardly from Rendova).  [Your uncle] Valentin Moya and 31 other soldiers died in this attack.  There were only three (3) survivors…”

Our mother loved Valentin deeply, and was often sad because she did not know Valentin’s final resting place.  This simple, little fact eluded her for nearly 65 years. We now know that Valentin, along with 36,285 soldiers missing in action, is honored on the “Tablets of the Missing” at the Manila American Cemetery and Memorial in the Philippines.

Robert Griego made a video to honor our uncle Valentin Moya and dedicated it to Nancy (Moya) Griego, as her final closure to this chapter in her brother’s life.

On this Memorial Day, there is another person I'd like to highlight - my good friend, Jim Harvey who is 82 years young today.  In the day, he was the number one packer at the annual Mule Days competitions; a real cowboy.  We rode many miles together in the backcountry of Sequoia and Kings Canyon National Parks.  He taught me everything I know about horses and mules.


Here are some pictures from this years Bishop Mule Days:

Posted by Robert Griego at 8:30 PM