"Humankind has not woven the web of life. We are but one thread within it. Whatever we do to the web, we do to ourselves. All things are bound together. All things connect" ~ Chief Seattle


Rarely do I ride 1,800 miles just because a stranger suggests an awesome ride.  "This ride is in Utah," he said.  I had just met Scott in Springerville, Arizona, and he was already persuading me on a great ride in Utah, near his home.

He called it the Nebo Loop, a place near Spanish Fork, Utah.  Never heard of it, let alone been there.  He seemed like a real biker so I listened.  "Utah is so beautiful, and this ride on the Nebo Loop is awesome; I know you'd love it."  Apparently, he owns a fly fishing shop.  His card read 'Scott's Fly Fishing Shoppe.'

Honestly, I thought I'd never see him again.  But fate has its own ways of correcting our misjudgments.  So, 900 miles later, I was looking for Scott's Fly Shoppe where we agreed to meet in Spanish Fork, Utah.

I left Three Rivers, California two days earlier.  The alarm clock rudely rang at 5 a.m. and reluctantly I got out of bed.  My first stop was only ten miles down the road when I saw the sun poking its head over the Sierra Range in Sequoia National Park.  I always try to connect with someone or something on each of my trips.  It's just something I do to allow the karma to follow through me on another adventure.  The morning sunset was that karma.

The hot desert sun across the Mojave Desert was intense.  I applied tons of sunscreen and drank gallons of water.  The temperature, as I passed Las Vegas, was 107 degrees.  The hot wind would be with me until I reached Utah that evening.

As I approach, Cedar City, Utah there is a large fire burning to the west.  I would later hear from my nephew Ruben who works for the U.S. Forest Service in fire management that this fire was huge.  He would later tell me that he and his crew would be redirected from Mesa, Arizona back to fight the fires in Utah where a second large fire broke out.

I had never been to Cedar Breaks National Monument so that's where I'm heading.  Cedar Breaks sits at over 10,000 feet and looks down into a half-mile deep geologic amphitheater.  At this higher elevation, the air is cool and such a relief from the hot desert.  There are wildflowers everywhere and though it is windy, I immediately like this National Park Service gem.  The night sky is crystal-clear and sleep comes easily after the punishing hot desert winds.

I plan to do a story for RoadRUNNER Motorcycle Touring & Travel magazine, so I can't spill all the beans just yet.  But here are a few pictures from this amazing National Park Service area in Utah.


I meet Scott at his Fly Shoppe in Spanish Fork early in the morning.  He introduces me to his friends and takes me into his fly shoppe which is rich with feathers, hooks, poles, and art.  Little did I know but Scott is also a musician and gives guitar lessons.

A biker, a fly fisherman, a musician.

He provides options and I select the Nebo Loop Byway which I had never been on before.  This byway crosses the Uinta National Forest between the cities of Nephi and Payson.  Our motorcycles cruise easily to over 9,000 feet in elevation.


The views of of Utah valley, the Wasatch Mountains, and 11,928 foot Mount Nebo is breathtaking.  Scott is in the lead, so I can play tourist and comfortably look at the scenery.  He pulls over often for pictures and I am impressed.

"I've seen elk and mountain lion just over there," he tells me.  "The Nebo loop is one of my favorite rides," he adds.  I agree.  A very special ride with a new friend.


I'm now heading west on Highway 6 for Great Basin National Park in Nevada.  I plan to camp there tonight, after some 150 miles.  The road is often described as the "Lonely Highway' but for me, I love the wide open country.  It's rare these days to see for fifty miles without another soul in sight.

When I travel, I do not keep track of time or days so when I arrived at Great Basin National Park all three campgrounds are full.  It is Friday and the busy summer months are here.  As I circle the last campground, a young biker flags me down.  "All of the sites are full," he says.  "You're welcome to camp here at my site."  Tired, and thinking that it could be another 100 miles before I found a suitable campsite, I thank him.  This will be home for tonight.


"My name is Jim, and I'm coming down from Oregon."  He was a young guy in his late 20's and rode a cool looking Harley-Davidson; kind of reminded me of 'Easy Rider.'  Talk flowed easily.  Apparently, he didn't enjoy camping alone and me on the opposite side of the fence.  I'm glad I took up his offer and we share tales and a few beers that I just grabbed at the general store in Baker.  For such a young guy, he was traveling extensively and I'd call him a real 'adventurist.'  He turned in early as he was planning an extensive 15-mile hike in the morning.

I leave Jim a note as I leave.

Perhaps, we too will meet again. You never know Easy Rider. 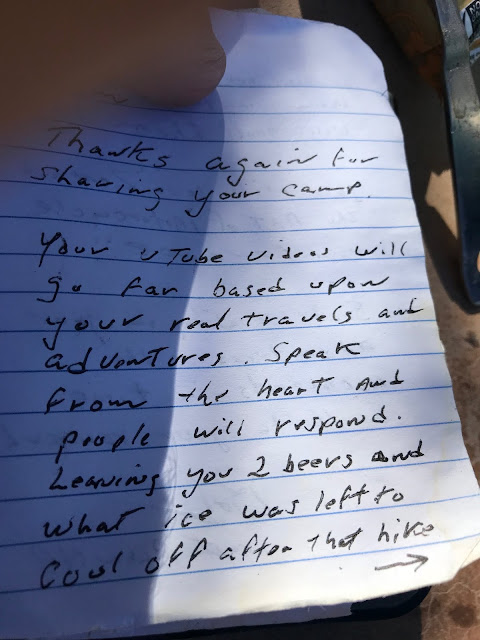 I love this ride towards Ely, Nevada and eventually, I plan to camp on some U.S. Forest Service land between Benton and Bishop, California.

My brother Gilbert and I camped there before and we named the camp 'Paiute Ridge.'

I build a small fire, cook my stew over an open fire, eat my Hostess Cupcake, and gaze at the stars.  It is quiet.  No one around for miles.  My sleeping bag is inches off the dirt and the stars are so bright as I move my finger easily across the entire universe.

Tomorrow, I hope to make home. 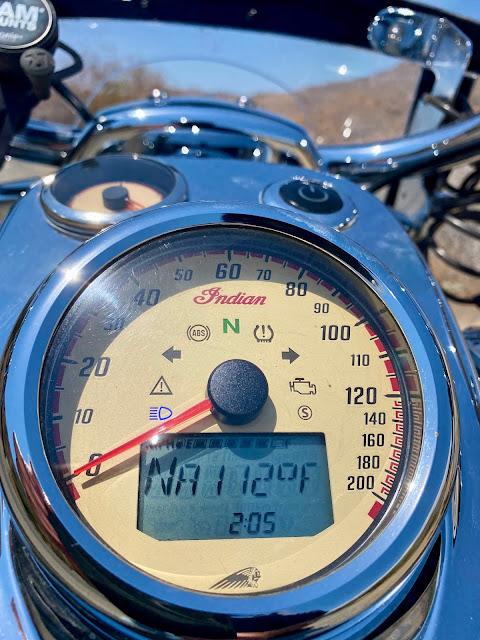 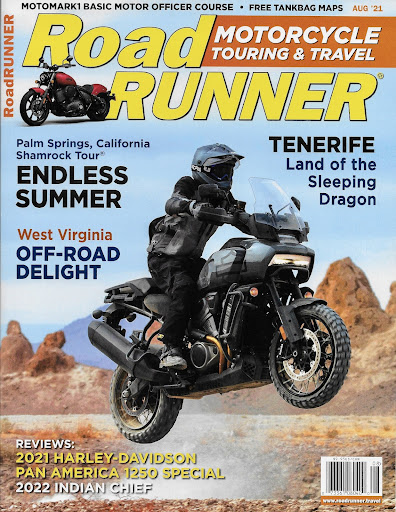