"You have to be what you are.  Whatever you are, you gotta be it."  Johnny Cash

Immediately, the rhythm of the Cash music caught my attention.

It was real, personal, and full of energy.

I snapped this picture of James Garner as he sang an opening Johnny Cash song.  I was hoping to capture the moment, and for me, this picture set the stage.  The Cash music was alive.

I had never heard of James Garner, yet he once lived in Hanford, just 48 miles away from me in Three Rivers.

The Visalia Times-Delta, our local newspaper, ran the headlines: “Johnny Cash Tribute Show comes to the Visalia Fox.  The headlines read, “Back in Black.”  This was to be a tribute show featuring native James Garner a day before Cinco de Mayo.

Being a huge fan of Johnny Cash, I was curious what James Garner had to say in his interview.  James Ward of the Visalia Times-Delta asked, “What should people expect when they come out to the show?”

“Folks can expect to hear the songs they know and love by Johnny Cash – Folsom Prison Blues, and Ring of Fire as well as others that Cash recorded over a nearly 50-year career.  They will also hear the stories behind those songs and about the life of the 'Man in Black.'  That's what makes our show unique  –  Never once in 12 years have I said: ‘Hello, I’m Johnny Cash’ or presented the show from a first-person perspective.  The energy is in the music and we work very hard, and take very seriously, presenting his music the way he and The Tennessee Three performed it, especially during their live performances.  My hope is that people leave feeling love for Johnny Cash and his music.”

His answer impressed me.

So when my wife asked if I wanted to go see James Garner's tribute to Johnny Cash, it was an easy decision.

In the distance corners of my mind, two iconic country-western stars have always resided – Marty Robbins and Johnny Cash.

In fact, the first two albums that I ever bought in 1969 were Marty Robbin’s – El Paso and Johnny Cash’s – At San Quentin.   I was attending San Jose State and I did not even own a record player at the time.  I knew that I had to own these two albums by two of the greatest country-western music stars.

James Garner in his opening remarks said that the last time he saw Johnny Cash perform was in 1991 at the Tower Theater in Fresno.  After the performance, he ran around back just as Cash was boarding his bus and shook his hand, letting him know that he was a big fan.  Although I never met Johnny Cash, I did come close that same year.

In March of 1991, I was the acting superintendent at Joshua Tree National Monument when I heard the news that Johnny Cash had been in the monument.  I could not believe the Foreman explaining that he just pulled Johnny Cash's Cadillac out of the soft sand.

So, I’m fully engaged.  Every word, every cord carries me back to my own memories of Johnny Cash.  You can read about my own tribute to Johnny Cash in my article: In Pursuit of Wildness: Joshua Tree National Park and Johnny Cash a Fading Sunset.

James Garner is remarkable.  He not only sang Cash's songs, but he told the stories behind his songs.  I learned a great deal.  James Garner and his band are well worth seeing in person.  Their music is real and I left the performance with a continual love for the Man in Black.

Johnny Cash was there singing his songs personally for me, if only in the far corners of my mind. 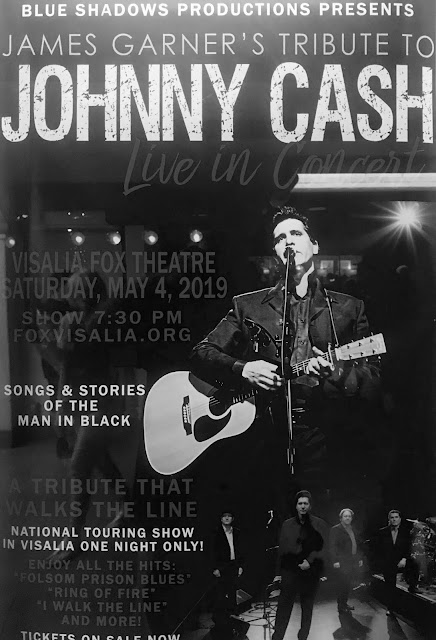