“Look deep into Nature, then you will understand everything better." ~ Albert Einstein. 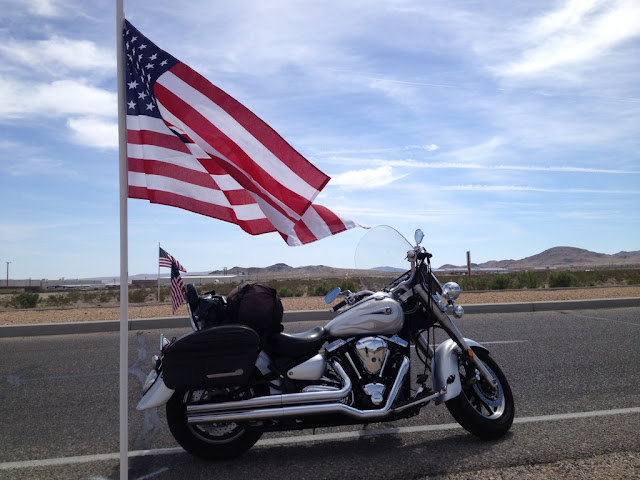 Even Einstein knew, at the speed of light, you could only be in one place at one time.
My bike did not break the sound barrier but it sure came close as I tried to make the opening ceremonies at Fort Irwin, some three hundred miles from my home in Three Rivers.  These were not just any military ceremonies, but the 50th Commemoration of Vietnam.
After 300 miles, I came up short.  I missed the opening ceremonies by 30 minutes.  Last November, I attended the Veterans Day celebrations in my hometown in Barstow.

That November 11th, I listened to outstanding military speakers.  The Commander from Fort Irwin was impressive.  He ended his speech by saying, "We intend to honor and welcome home our Vietnam Veterans in March next year, so stay tuned."  At the time, I wondered just what he meant, so I made a mental note to later find out.  It had to be important.

It turns out that Fort Irwin was going all out to honor and welcome our Vietnam Veterans.   It's been 50 years since I had been to Fort Irwin while attending John F. Kennedy High School in Barstow.

As I rode onto the base, there were American Flags everywhere.  It was not hard to follow them to the heart of the celebrations.

There were thousands of bikes in the specially designated parking so parking is easy.  There is a professional photographer taking pictures, so I ask him if he could take a picture of me with my cell phone, seconds after arriving at Fort Irwin.  The wind, I felt, was still blowing in my face after 300 miles.  "I did not break the sound barrier getting here but came close," I say as he gets takes the picture.   After he took the picture, he looked at me a bit funny.

One can only imagine what the keynote speaker had to say about Vietnam.  He was a photojournalist in Vietnam and the author of We Were Soldiers Once.  His name is Joe Galloway.  Perhaps, I'll see him another time.  I once saw him in a video interview and he had a certain way of telling the Vietnam story that made you want to listen.

There are thousands of people here and I do get to hear a few other speakers.  They are dynamic, and their words are full of emotion.  At times, a bit hard to hear but hear I do never-the-less.  One speaker talks about the empty table at the head of the room and he describes in detail why it is empty and how it represents those Vietnam soldiers who did not come back.  A real tear-jerker.

I was there to support my two close high school friends who served in Vietnam and are now deceased ~  *Gene Christiansen and *John Lopez.  They will never be forgotten, the Commander of Fort Irwin saw to that.

My brother Leo was also in Vietnam and he served with the 82nd Airborne but he was not able to attend.  There are other Vietnam Veterans from Barstow, like Robert Esquibel and Mike Ulibarri.  Mike and I were on the John F. Kennedy High School cross-country team.  Mike was one of the best cross-country runners in Southern California.

Just when I thought I would not see anyone I knew among the thousands of people, there was Mike Ulibarri walking towards me.  Seeing someone you have not seen in years, is special.  Mike is iconic and I see that many of the younger soldiers sense that and "thank him" for his service.  They are passing out gifts to the Vietnam Vets and I wait in line with Mike catching up on things.

He did not register in advance and now must go to a second line to register.  There is a young lady with a pen in hand who looks up at Mike.  "What branch of the service were you in?... What years of service?... What company?"  Then her final question, "Did you receive any citations, and if so, what were they."  All this time I'm standing next to Mike and his answers come without effort.  But his last answer surprised me.  He could have been asked "would you like sugar or cream with your coffee" and he casually said "Silver Star."  All this time, she has kept her head pointing to her notepad.  But now, she raises her head and looks directly at Mike.  Then she pauses, and writes on her notepad next to Silver Star, the word (Valor); and I saw her underline the word.  I never knew that about Mike.

Later, I would find out that the Silver Star is the third highest military decoration awarded for gallantry in action against an enemy of the United States.

There is another reason to be here at Fort Irwin.  Gary Sinise and the Lt. Dan Band are scheduled to perform at 2pm.  I was not going to miss this.  The young soldier next to me asks, "How did you hear about this event?"  He heard my story about Veterans Day in Barstow and thanked me.  I did not have any words for him, so I shook and nodded my head.  "Why are you here?" I ask.  "Gary Sinise, he rocks."

He is a true blue American who is here to honor and thank all the veterans, especially, as he said, the Vietnam Veterans.  He plays to the audience and they love him.  Finally, he walks into the crowd and people are taking pictures like crazy.  Mostly, selfies.

The Company Commander was true to his words that November 11th day at the Barstow Cemetery... "We intend to honor and welcome home our Vietnam Veterans in March next year, so stay tuned."

Three hundred miles back, but this time, I camped near Lake Isabella Lake to shorten my trip, and over my campfire, reflect on the day.


It was perhaps my best 600 miles, such a small price in exchange for remembering and honoring my two high school friends, *Gene Christiansen and *John Lopez who both rode Yamaha 305cc's in our younger days.

We were fondly called the infamous, Yamaha Gang.