“True patriotism isn't cheap. It's about taking on a fair share of the burden of keeping America going.” - Robert Reich

I travel America on my motorcycle. I’m not a member of a motorcycle club so when I got an invitation from Jack Wise, President of the LA Fire Hogs M/C to join their club on the “Ride to the Flags,” I was honored.  I knew nothing about the ride, but the name told me that this was important and patriotic.

This ride is 28 miles along the Pacific Coast Highway (PCH) from Point Mugu Naval Air Station to Pepperdine University in Malibu.  I had never been there before so going to a new place has always agreed with me.

I was told that this was one of the biggest benefit motorcycle rides with well over 1,000 motorcycles riding for a great cause.  In this case, it was a benefit ride organized by the White Heart Foundation to raise money for a retired Navy sailor who was severely hurt when shot in the head by a sniper in Afghanistan.  Her recovery has been slow yet deliberate.

It is early in the morning in Thousand Oaks when I meet Rudy Santiago, Sgt-at-Arms with the LA Fire Hogs M/C.  He welcomes me and the other riders.  He seems like a veteran rider and will be our leader to Point Mugu Naval Air Station.  “Rudy, I plan to stop along the route to take a picture of my motorcycle as I’m approaching a milestone,” I tell him.  “Oh, what’s the milestone?”  I say that “I currently have 149,982 miles on my bike, and I want to get a picture at 150,000 miles on the odometer.”  He then hollers to the other riders, “When Bob pulls over, we stop.  He is approaching 150,000 miles and wants a picture.”  Now that made me feel special.  “Thanks, Rudy.”  I don’t know the roads we took, but it was a scenic ride in the mountains. The air-cooled in the morning fog as we approached the coast.

My odometer reads 149,999 miles as our group pulls up to the military base.  We are sectioned off in groups of 100 motorcycles.  We are ordered to dismount while the Navy police and his K-9 dog walks by each motorcycle searching for bombs and other illegal stuff.  We all passed with flying colors.

Ryan, with the White Heart Foundation, explains what this event is all about.  He told us that this was the 11th such ride, all those before had been so successful.  He introduced several injured soldiers who passionately tell their story, their injuries, and their recovery.  Each thanks us for being here. They were positive and inspirational.  Each had been helped by the White Heart Foundation and they were here to help her.

Then a 9/11 vehicle enters the parade grounds.  The keynote speaker had arrived.  This motorcycle ride is for her.  It took her a long time to get out of the car.  It took even longer for her to reach the podium.  Her young daughter helped her up the stairs onto the stage.  She spoke softly yet with passion, "This is the first time I have been to this event.”  She told us her story in detail about her tour in Afghanistan leading up to the day she was shot by a sniper.  She did not leave out details and took us directly to that battle scene.  The crowd was quiet.  She told us that she suffered paralysis on her right side and that she was legally blind.  Her humor softens the blows.  She was why we were here.  There were thousands here listening to her and so many badass bikers had tears in their eyes.  Yet, she ended her speech by thanking us for being here to support her.  “No, we are here to thank you for your service,” words I spoke to myself.  The roaring applause confirmed that.

Here before us is a true American hero – USN HMC Holly Katke.

The motorcycle leader gave us a quick safety talk.  “We’ve never had an accident on the previous 10 rides and we want to keep it that way.”  He asked us to ride two abreast, about 40 miles an hour along the 28 miles on the Pacific Coast Highway to the “Flags” at Pepperdine University in Malibu.  I had never been here so I listened intently.  “Ok, get on your bikes - let’s shut down the Pacific Coast Highway!”  The sound of bikes firing-up was intense.

The roar of over 1,000 motorcycles made the hair on the back of my head stand-up.  As we entered Highway 1, emotional tears flowed from my eyes. There were rows of American flags with young Boy Scouts saluting us.  I was honored.

At one point along the PCT, I could see a mile ahead of me.  There were motorcycles as far as the eye could see.  In my mirror, motorcycle headlights lined the PCT for what seemed like forever.  The tourists along the beach enthusiastically waved as we passed.  Little kids looked in amazement.  Soon, American flags began to wave as we approached Pepperdine University.  I loved it.

When we arrived at Pepperdine University, there were some 3,000 flags representing the victims who perished on September 11, 2001.  The scene was humbling, something that I did not expect.

As painful as it was that September day, our Nation is stronger.

Thank you Holly Katke for your service! 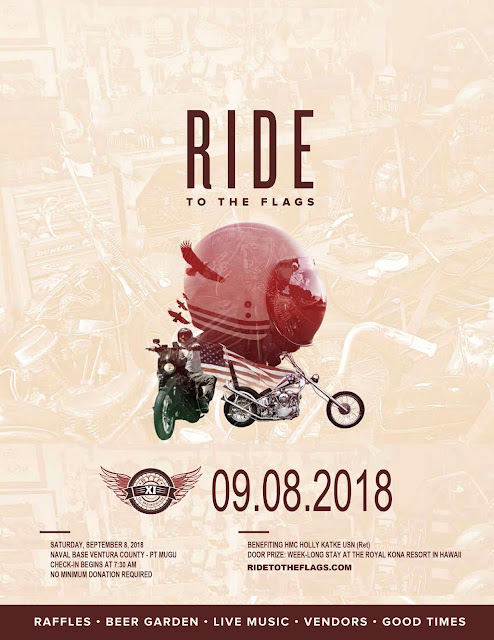